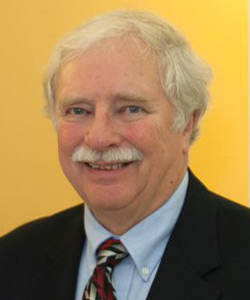 Stan Sloan, one of America’s top experts on US-European relations, is the founding Director of the Atlantic Community Initiative, and is a Visiting Scholar at the Rohatyn Center for Global Affairs at Middlebury College.  He served as a consultant to the National Defense University Center for Transatlantic Security Studies in 2011-12 and since 2014 he is an Associate Fellow at the AIES.

For the past ten years, Stan has taught courses on transatlantic relations and on American power during the Winter Term at Middlebury College in Vermont.  His latest book, Permanent Alliance? NATO and the Transatlantic Bargain from Truman to Obama, was published by Continuum Books in July 2010.

Stan was educated at the University of Maine (BA), Columbia University's School of International Affairs (MIA), and American University’s School of International Service (abd PhD).  He is a Distinguished Graduate of the Air Force Officers' Training School and served as a commissioned officer in the United States Air Force. He began his more than three decades of public service at the Central Intelligence Agency in 1967, serving as NATO and European Community desk officer, member of the U.S. Delegation to the (Vienna) Negotiations on Mutual and Balanced Force Reductions, and as Deputy National Intelligence Officer for Western Europe.

Stan was employed by the Congressional Research Service (CRS) of the Library of Congress in a variety of analytical and research management positions from 1975-1999, including head of the Office of Senior Specialists.  During 1997-98, at the request of the late Senator William Roth, Stan served as rapporteur for the North Atlantic Assembly special presidential report on “NATO in the 21st Century.”  In April 1999, Stan retired from his position as the CRS Senior Specialist in International Security Policy and returned to his home state of Vermont to continue writing, lecturing and teaching.

Stan has lectured widely in the United States and Europe on US foreign and security policy and on transatlantic relations.  His sponsors in recent years have included the United States State Department Public Diplomacy and the Fulbright Senior Specialist programs.  He has since the early 1990s been a regular presenter at the NATO College in Rome where, in September 2005, he was named an “Honorary Ancien.”

The Future Defense of the West

Stanley R. Sloan: Transatlantic Relations and the Future Defense of the West – Implications for the EU and NATO, AIES Fokus 11/2019

The Future of the Transatlantic Relations, China Russia and Brexit