The Future Defense of the West

Stanley R. Sloan: Transatlantic Relations and the Future Defense of the West – Implications for the EU and NATO, AIES Fokus 11/2019 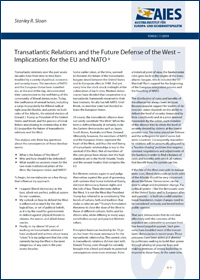 Transatlantic relations over the past seven decades have from time to time been troubled by a variety of political, economic and security issues. The members of NATO and the European Union have nonetheless, at the end of the day, demonstrated their commitment to the well-being of this community of liberal democracies. Today, the confluence of several factors, including a surge in popularity for illiberal radical right populist leaders and parties on both sides of the Atlantic, the related election of Donald J. Trump as President of the United States and Brexit, and the process of Great Britain abandoning its membership in the EU jeopardize the future of transatlantic relations and the West.

This analysis asks three key questions about the consequences of these developments: