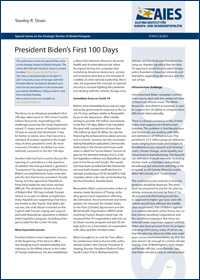 This publication is part of a special Fokus series on the Strategic Review of Global Hotspots. The online AIES Talk with Stanley R. Sloan is available online here.

The focus on an American president's first 100 days dates back to 1933 when Franklin Delano Roosevelt, responding to the challenges posed by the Great Depression, signed 15 major pieces of legislation and 76 laws in exactly that timeframe. It has, for better or worse, since then become a standard of analysis applied to the beginning of every president's term. By most measures, President Joe Biden has been relatively successful in his first 100 days.

Another informal term used to discuss the opening of a presidency is the question of whether the new president is granted a "honeymoon" by opposing political forces. Biden's accomplishments have come despite the fact that former president Donald Trump and the opposition Republican Party have made his task more, not less, difficult. The obstacles thrown in front of Biden's first 100 days include Trump's refusal to accept his defeat as legitimate, many Republicans supporting what became known as the "big lie" that Biden did not win, the mob attack mounted on the Capitol with Trump's urging and support, and solid Republican opposition to Biden's initial legislative program, including emergency relief for the Covid-19 crisis.