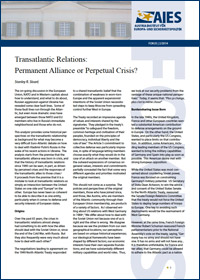 The on-going discussion in the European Union, NATO and in Western capitals about how to understand, and what to do about, Russian aggression against Ukraine has revealed some clear fault lines.  Some of those fault lines run through the Atlantic, but even more dramatic ones have emerged between those NATO and EU members who live in Russia’s immediate neighborhood and those who do not.

In Kooperation mit der US Botschaft in Wien