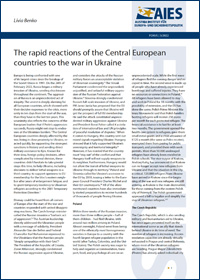 Europe is being confronted with one of its largest crises since the breakup of the Soviet Union in 1991. On the 24th of February 2022, Russia began a military invasion of Ukraine, sending shockwaves throughout the continent. The aggression of Russia is an unprecedented act of iniquity. The unrest is deeply alarming for all European countries, which showed with their decisive responses to the crisis, more unity in ten days from the start of the war, than they have in the last ten years. This unanimity also reflects the concerns of the European leaders that if Putin's aggression succeeds, Russia might not stop its endeavors at the Ukrainian borders. The Central European countries deeply affected by the war, being in close proximity to Ukraine, reacted quickly, by supporting the strongest sanctions in history and sending direct military assistance to Kyiv. Known for their slow, foreign policy decisions, often complicated by internal division, these countries didn't hesitate to take pivotal steps this time, to help Ukraine, including decisions to deliver lethal weapons to a third country; to support openness to EU membership for the bloc's eastern neighbor after years of enlargement fatigue; and to grant temporary residency to Ukrainian refugees according to the 2001 Temporary Protection Directive.

Dismay could be heard from all corners of Europe after the start of the war and countries responded with united disapproving reactions. The Czech foreign minister called the Russian invasion a "barbaric act of aggression". The Austrian leadership directly addressed the Ukrainian people with a message of solidarity. President Alexander Van der Bellen and Federal Chancellor Karl Nehammer expressed to the Ukrainians that the Austrian people "deeply sympathize with their fate". The President of the Republic of Croatia, Zoran Milanović, strongly condemned the Russian aggression against Ukraine, and considers the attacks of the Russian military forces an unacceptable violation of Ukrainian sovereignty. The Slovak Parliament condemned the unprovoked, unjustified, and unlawful military aggression of the Russian Federation against Ukraine. Slovenia strongly condemned Russia's full-scale invasion of Ukraine, and PM Janez Janša has proposed that the EU should promptly assure that Ukraine will get the prospect of full EU membership. He said the attack constituted unprecedented military aggression against Ukraine and President Borut Pahor called it a violation of international law and UN principles of peaceful resolution of disputes. When it comes to Hungary, this country sent out mixed signals regarding Ukraine. Hungary stressed that it fully supported Ukraine's sovereignty and territorial integrity. However, it has insisted that the country must "stay out" of the conflict and that Hungary itself will not supply weapons to its neighbor. Furthermore, Hungary would not allow the transit of lethal weapons to Ukraine through its territory. Poland and Slovenia called for Ukraine's accession to the EU by 2030, issuing a letter to the European Council President Charles Michel and their EU counterparts. All of the aforementioned countries have also immediately started preparations to receive hundreds of thousands of people fleeing Ukraine.