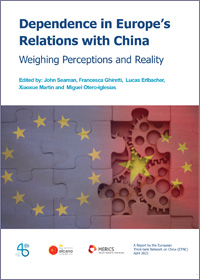 For the eighth report since its inception in 2014, the European Think-tank Network on China (ETNC) brings together analysis on 18 countries plus the European Union to examine how dependencies on China are presented in European public and policy-level debates, and how the notion shapes policymaking in each case. Indeed, the idea that Europe has grown dependent on China has become a common refrain across the continent. The chapters that follow provide substance, and in some cases nuance, to these discussions, contributing a much-needed, "bottom-up" perspective on an intensifying European debate.

Whereas the slowdown of the European economy following the 2008 global financial crisis shaped Austria's perception of China as an opportunity for growth and export diversification—a "market of hope" or Hoffnungsmarkt—, recent years have seen the emergence of a discussion on strategic dependence. In this context, control over key technologies, materials, and goods, as well as research and innovation capabilities, are regarded as central to the ability to achieve the digital and green transitions, while also navigating geopolitical conflicts, as well as crises, such as the Covid-19 pandemic. With China's growing role within sensitive ecosystems, in particular digital technologies, the country and its policies have become a focal point of the debate on strategic dependencies. Crucially, given Austria's primary reliance on the single market and the global nature of these strategic dependencies, the debate has focused on the broader European context. While the Covid-19 pandemic served as a wake-up call by making the reliance in pharmaceutical products visible to the Austrian public, the Russian invasion of Ukraine might well induce a fundamental geopolitical rethinking of Austria's strategic dependencies.

About the European Think-tank Network on China (ETNC)

The European Think-tank Network on China (ETNC) is a gathering of China experts from various European research institutes. It is devoted to the policy-oriented study of Chinese foreign policy and relations between China and European countries, as well as China and the EU. The ETNC facilitates regular exchanges among participating researchers with a view to deepening understanding within the European policy and research community and the broader public about how Europe, as a complex set of actors, relates with China and how China's development and evolving global role are likely to impact the future of Europe. The network's discussions and analyses take a decidedly 'bottom–up' approach, accounting for the various aspects of bilateral relations between European countries and China, and the points of convergence and divergence among EU member states, in order to examine EU–China relations in a realistic and comprehensive way.

The network was first launched on the initiative of the Elcano Royal Institute and the French Institute of International Relations (Ifri) in Brussels on 6 November 2014. This meeting brought together experts from eleven EU member states, as well as observers from EU institutions. The ETNC members decided to meet in a different European capital every six months and the Mercator Institute for China Studies (MERICS) joined Elcano and Ifri in their efforts to move the project forward. The network now includes members from 21 research institutes in as many countries, and each participates on the basis of equality.

The ETNC strives for independent policy research and analysis and, since its inception, is entirely funded by its participating members. The topics considered in ETNC reports are debated and decided upon collectively by its members. The views and analysis provided in each chapter of this report are thus the sole responsibility of the signed author or authors and do not in any way represent the views of all ETNC members, participating institutes, or the institutes with which the authors themselves are affiliated.