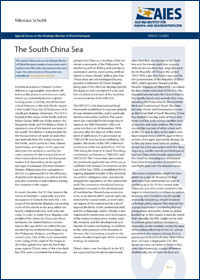 In political science, a 'hotspot' is often defined as a geographic area where different political actors and interests clash, which can potentially lead to a global turning point. Currently, one of the most critical hotspots in the Indo-Pacific region is the South China Sea (SCS) because of its significant strategic dimension. The SCS is located at the nexus of the Pacific and the Indian Ocean. With two choke points, the Singapore Strait, and the Malacca Strait, it represents one of the busiest sea-lanes in the world. This lifeline is indispensable for the transportation of crude oil and other raw materials from the Indian Ocean to the Pacific, and to ports in China, Taiwan, South Korea, and Japan. In the opposite direction, this sea-lane is used by the same countries for the transportation of their industrial products to the European market and, depending on the goods and type of transport, the entire Eastern Atlantic. Maintaining free navigation in the SCS is a prerequisite for the efficiency of global trade dynamics as well as for the peaceful coexistence and relations among the countries in the region.

This special Fokus series on the Strategic Review of Global Hotspots consists of seven parts and is based on the AIES online discussion on the same topic. The online lectures of the authors are available at aies.at/global-hotspots