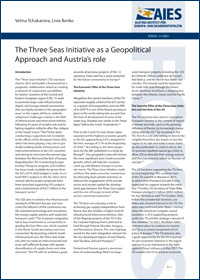 The "Three Seas Initiative" (TSI) was launched in 2015 and builds a framework for a pragmatic collaboration aimed at creating a network of cooperation possibilities for twelve countries of the Central and Eastern European region (CEE). It seeks to promote large-scale infrastructural, digital, and energy-related investments that are highly needed in this geographic area, as the region still faces underdevelopment challenges mainly in the field of infrastructure and interconnectedness following 45 years of socialist rule and its lasting negative setbacks after the collapse of the Soviet Union. The TSI has been conducting a supportive role in relation to the efforts of the European Union (EU), which has been playing a key role in gradually building better infrastructure and interconnectedness in the CEE countries and aiming to overcome the present gap between the West and the East of Europe.