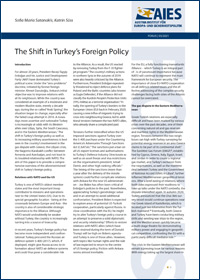 For almost 20 years, President Recep Tayyip Erdoğan and his Justice and Development Party (AKP) have dominated Turkey's political scene. Under the "zero problems" doctrine, initiated by former foreign minister Ahmet Davutoğlu, Ankara's initial objective was to improve relations with all its neighbours. While the country was considered an example of a moderate and modern Muslim state, merely a decade ago, during the so-called "Arab Spring", the situation began to change, especially after the failed coup attempt in 2016. A nowadays more assertive and nationalist Turkey is increasingly at odds with its Western allies over Libya, Syria, the South Caucasus, and in the Eastern Mediterranean.1 The shift in Turkey's foreign policy as well as its increasing military assertiveness is best seen in the country's involvement in the gas dispute with Greece, the Libyan crisis, the Nagorno-Karabakh conflict between Armenia and Azerbaijan, and not least in its troubled relationship with NATO. The aim of this paper is to provide a comprehensive overview of the aforementioned shift in Turkey's foreign policy.