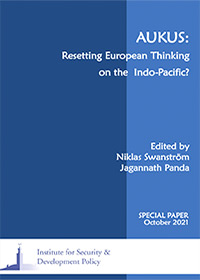 Minilateralism in Asia and the Indo-Pacific has emerged as the foreign policy tool of choice by states competing for regional superiority. As a result, powers across the spectrum have engaged in deeper cooperation with "like- minded" states, envisioning trilaterals, such as the India–Japan–Australia, India–United States (US)–Japan, and India–France–Australia, or quadrilaterals, such as the India–Japan–US–Australia (Quadrilateral Security Dialogue or Quad) process, currently Indo-Pacific's most pivotal security dialogue.

The recent inking of a security pact, AUKUS, between Australia–United Kingdom (UK)–US comes as a part of this minilaterals-driven synergy. However, the AUKUS announcement has given rise to a vigorous debate on the implications of the security arrangement, its strategic positioning in the region, and the value that it can add to existing regional alliances like the Quad, which is perceived to be a leading forum to realise the interests of domestic powers in the region. How much does the AUKUS strengthen – or weaken – the Quad and its long-term goals in the Indo-Pacific? What impact does it leave for Europe, and particularly to the European outlook, toward the Indo-Pacific? Has the AUKUS created a strategic gap between Europe and the Indo-Pacific?

On October 13, 2021, AIES Director Velina Tchakarova participated in the ISDP Webinar on AUKUS: Resetting the European Thinking on Indo-Pacific?. The webinar aimed at analysing the significance of the AUKUS and its strategic fallout, and draw the future implications for Europe and the region at large.