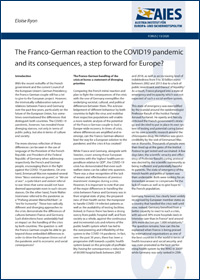 With the recent reshuffle of the French government and the current Council of the European Union's German Presidency, the Franco-German couple still has a lot to give to the European project. However, the intrinsically collaborative nature of relations between France and Germany over the past few years, particularly on the future of the European Union, has sometimes overshadowed the differences that distinguish both countries. The COVID-19 pandemic, however, has revealed those diverging stances, not only in terms of public policy, but also in terms of culture and society.

The more obvious reflection of those differences can be seen in the use of language of the President of the French Republic and President of the Federal Republic of Germany when addressing respectively the French and German people, encouraging them in the fight against the COVID-19 pandemic. On one hand, Emmanuel Macron repeated several times "Nous sommes en guerre", or "We are at war", a quite blunt and violent referral to war times that some would not have deemed appropriate even in such circumstances. On the other hand, Frank-Walter Steinmeier referred to the pandemic as a "Prüfung unserer Menschlichkeit", or "test for humanity". Those two radically different and diverging approaches to the crisis demonstrate the differences of cultures between France and Germany. Such distinctions have undeniably had an impact on the handling of the crisis by both countries. The question is: will the Franco-German couple be able to go beyond those embedded differences in order to drive the European Union out of the pandemic and its economic and social consequences?