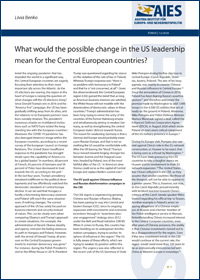 Amid the ongoing pandemic that has impeded the world in a significant way, the Central European countries are eagerly focusing their attention to their most important ally across the Atlantic. As the US elections are nearing, the region in the heart of Europe is raising the question of: what changes will the US elections bring? Since Donald Trump's win in 2016 and his "America first" campaign, the US has been gradually shifting away from its allies, and the relations to its European partners have been notably strained. The president's numerous attacks on multilateral institutions such as NATO have tested the long-standing ties with the European countries. Moreover, the COVID-19 pandemic has also damaged America's image within the European countries, according to a recent survey of the European Council on Foreign Relations. The United States' insufficient response to the pandemic has brought doubt upon the capability of America to be a global leader. In numbers, 68 percent of French, 65 percent of Germans and 38 percent of Poles have decreased in trust towards the US, according to the poll. In the last four years, Trump's presidency remained indifferent to the political developments and has effortlessly watched the democratic standards in Central Europe decline. It can be said that Hungary is hardly a functioning democracy anymore and Poland will reach the same situation soon, if nothing changes. The current approach of the US has solely focused on business interests and security instead of values. This can be clearly seen when comparing Obama's and Trump's approach in certain situations. For example, the administration of Barack Obama steadily and openly criticized the fading democratic path in Hungary and Poland. However, with the arrival of Donald Trump, all pressure on the Central European governments to maintain democracy was gone. For instance, during the Polish President's visit to the White House in 2019, President Trump was questioned regarding his stance on the violation of the rule of law in Poland. Whereas Trump's response was: "there is no problem with democracy in Poland" and that he is "not concerned, at all". Given the aforementioned, the Central European region (CEE) gained the belief that as long as American business interests are satisfied, the White House will not meddle with the deterioration of democratic values in these countries. Trump's administration has been long trying to revive the unity of the countries of the former Habsburg empire and simultaneously aiming to weaken Germany, as well as strengthening the central European states' distrust towards Russia. The reason for weakening Germany is that a German-led Europe would probably mean a pro-Russian Europe, and that is not something the US would be comfortable with. After the UK leaving the "block", Trump's focus moved towards forging stronger ties between Austria and the Visegrad countries, headed by Poland, one of the most faithful allies of the US. In America's view, Vienna could serve as the capital of Central Europe and replace Berlin's current role.

In Kooperation mit der US Botschaft in Wien