Violent extremism in the Sahel 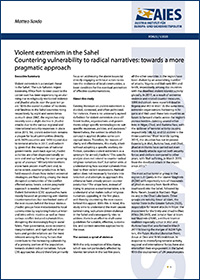 Violent extremism is a constant threat in the Sahel. The sub-Saharan region traversing Africa from its west coast to the center-east has been experiencing an alarming rise in religiously motivated violence and jihadist attacks over the past ten years. With the overall number of incidents and fatalities in the Sahel countries rising respectively by eight and seven times as much since 2007, the region has only recently seen a slight decline in jihadist attacks due to the various regional and international security responses in place since 2015. Yet, violent extremism remains a plague for local communities directly, with 2429 casualties and 1496 injured due to terrorist attacks in 2017, and indirectly, given that the responses of national governments push back against jihadist activities are often disproportionally severe and end up fueling the ever-growing spiral of violence. Military interventions alone have proven insufficient and, to some extent, counter-productive. In fact, field research shows how violent extremist ideologies are flourishing among the most disrupted communities of the conflict-affected areas; hence, a more pragmatic approach is needed. Recent Counter Violent Extremism (CVE) approaches have mostly focused on promoting anti-Islamist counternarratives but overlooked some of the root causes behind the issue. Various jihadist groups have metastasized to local communities by exploiting historical inter- and intra-ethnic rivalries as well as those various conflict-induced vulnerabilities disrupting the increasingly fragile social fabric. Poor governance, socio-economic marginalization, and rigid cultural structures and gender relations are the most relevant among the many factors that contribute to the increasing vulnerability of a growing portion of the population towards violent radical narratives. Future CVE approaches should therefore primarily focus on addressing the above issues by directly engaging with local actors to restore the resilience of local communities, a basic condition for the eventual promotion of effective counternarratives.

The coup d‘état in Mali