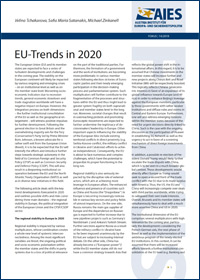 The European Union (EU) and its member states are expected to face a series of turbulent developments and challenges in the coming year. The stability on the European continent will likely be impacted by various ongoing and emerging crises – on an institutional level as well as on the member state level. Worsening socio-economic indicators due to recession trends, general economic slowdown and trade stagnation worldwide will have a negative impact on Europe. However, the integration process in both dimensions – the further institutional consolidation of the EU as well as the geographical enlargement – will witness positive impulses for further development. Following the general election in Great Britain and the overwhelming majority win for the Conservative party led by Prime Minister Boris Johnson, a known advocate for a rather swift exit from the European Union (Brexit), it is to be expected that the EU will intensify the efforts and introduce further steps towards strategic autonomy in the field of its Common Foreign and Security Policy (CFSP) as well as Common Security and Defence Policy (CSDP). This will also result in a deepening institutional cooperation between the EU and the North Atlantic Treaty Organisation (NATO) as well as in diverse new initiatives in this field.

This article deals with the key trend developments forecasted in 2020 and outlines possible shifts and risks considering three main domains – the regional stability in Europe, the political integration of the European Union and the CFSP/CSDP sector.