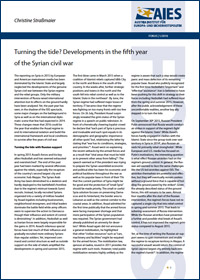 The reporting on Syria in 2015 by European and American mainstream media has been dominated by the Islamic State and largely neglected the developments of the genuine Syrian civil war between the Syrian regime and the rebel groups. Only the military intervention of Russia raised international attention but its effects on the ground hardly have been analyzed. Yet, the past year has seen, in the shadow of the ISIS spectacle, some major changes on the battleground in Syria as well as on the international diplomatic scene that few had expected in 2014. These changes mean that 2016 could be the year that enables the Assad regime to end its international isolation and build the international framework and local conditions to survive after five years of civil war.