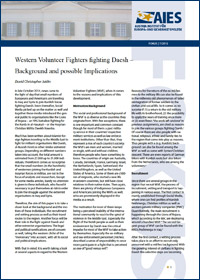 In late October 2014, news came to the light of day that small numbers of Europeans and Americans are traveling to Iraq and Syria to join Kurdish forces fighting Daesh. Soon thereafter, Social Media picked up on the matter as well and together these media introduced the gen­eral public to organisations like the Lions of Rojava – an YPG battalion fighting for the Kurds in al-Hasakah – or the Assyrian Christian Militia Dwekh Nawsha.

Much has been written about islamist foreign fighters traveling to the Middle East to fight for militant organisations like Daesh, al-Nusrah Front or other similar extremist groups. Depending on different numbers taken into account, the total amount is estimated from 27.000 up to 31.000 individuals. Therefore it comes as no surprise that the small numbers (in the hundreds) of westerners joining the Kurdish and Assyrian forces or militias, are not in the focus of analysts and researchers. Except for some media articles, barely no attention is given to these individuals, who found it necessary to put themselves at risk in order to join the struggle against the extremist organisations in Iraq and Syria.

Therefore, the aim of this paper is to take a closer look at the background and the motives of these individuals, the recruitment and vetting process as well as their travel routes to the region. Another focus will be their role in the fight against Daesh and other extremist organisations. The legal and political ramifications are of concern as well, taking the western cliché of the “mercenary” into account, with all its social and political implications.