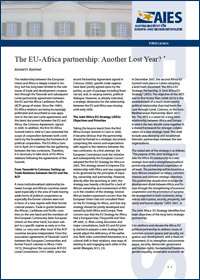 The relationship between the European Union and Africa is deeply rooted in history, but has long been limited to the sole issues of trade and development cooperation through the Yaoundé and subsequent Lomé partnership agreements between the EU and the Africa-Caribbean-Pacific (ACP) group of states. Since the 1990's, EU-Africa relations are being increasingly politicized and securitized as was apparent in the two last Lomé agreements and the latest document between the EU and Africa, the Cotonou Agreement, signed in 2000. In addition, the first EU-Africa Summit held in 2000 in Cairo extended the scope of cooperation between both continents by the broadening the framework of political cooperation. The EU-Africa-Summit in April 2014 marked the last gathering between the two continents. Therefore, it is necessary to take stock of EU-Africa relations following the agreements of the Summit.