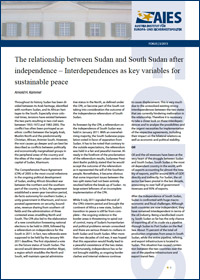 Throughout its history Sudan has been divided between its Arab heritage, identified with northern Sudan, and its African heritages to the South. Especially since colonial times, tensions have existed between the two parts resulting in two civil wars between 1955-1972 and 1983-2005. The conflict has often been portrayed as an ethnic conflict between the largely Arab, Muslim North and the predominantly Christian, African, Animist South. However, the root causes go deeper and can best be described as conflicts between politically and economically marginalized groups in the peripheral areas of the country and the elites of the major urban centre in the capital of Sudan, Khartoum.

The Comprehensive Peace Agreement (CPA) of 2005 is the most crucial mile­stone in the ongoing political development of Sudan, ending Africa’s bloodiest war between the northern and the southern part of the country.