Franco Algieri: Irrelevant or not? Thoughts on the EU’s strategic partnership with China, AIES Fokus 8/2012. 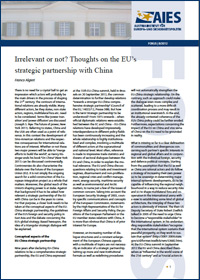 There is no need for a crystal ball to get an impression which actors will probably be the main drivers in the process of shaping the 21st century. The contours of international relations are already visible. Many different actors, be they states, non-state actors, regions, multilateral fora etc. need to be considered. Terms like ‘power transition’ and ‘power diffusion’ are discussed (Joseph S. Nye: The future of power, New York 2011). Referring to states, China and the USA are often used as a point of reference. In this context the development of Sino-American relations and the respective consequences for international relations are of interest. Whether or not these two major powers will be able to “merge efforts to build the world”, as Henry Kissinger ends his book “On China” (New York 2011) can be discussed controversially. Controversies do also characterize the debate over the future of the European Union (EU). It is not simply the ongoing search for a solid construction of the European integration project as a whole that matters. Moreover, the global reach of the Union’s shaping power is at stake. Against that background it has to be asked how relevant a strategic partnership of the EU with China can be in the years to come. For that purpose, a closer look needs to be taken at the conceptual aspects of the EU-China strategic partnership, the guidelines of the EU’s foreign and security policy in East Asia and the debate concerning the EU’s global strategy. Based hereupon, the idea of a triangular strategic dialogue will be explained.

Velina Tchakarova, Enter the 'DragonBear': The Russia-China Partnership and What it Means for Geopolitics, ORF Issue Brief No. 538, April 2022, Observer Research Foundation.