Almut Möller and Roderick Parkes: Germany as seen by the other EU member states three years into the euro crisis, AIES Fokus 7/2012. 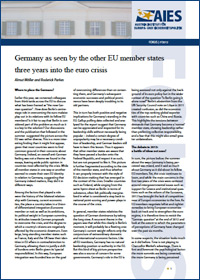 Earlier this year, we convened colleagues from think tanks across the EU to discuss what has been framed as “the new German question”. How does Berlin’s centre-stage role in overcoming the euro malaise play out in its relations with its fellow EU members? Is it fair to say that Berlin is considered part of the problem as much as it is a key to the solution? Our discussions and the publication “Germany as Viewed by other EU Member States” that followed in the summer suggested the picture across the EU was rather diverse. This is a more inter­esting finding than it might first appear, given that most countries seem to find common ground in their concerns about Germany. Indeed, an overall anti-German feeling was not a theme we found in the essays, leaving aside public opinion in countries most affected by the crisis. While all member states in one way or another seemed to create their own EU identity in relation to Germany, suggesting that Germany indeed matters, they did it in different ways.