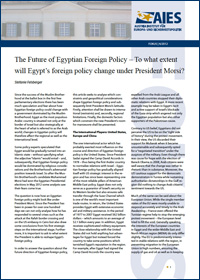 Since the success of the Muslim Brotherhood at the ballot box in the first free parliamentary elections there has been much speculation and fear about how Egyptian foreign policy could change with a government dominated by the Muslim Brotherhood. Egypt as the most populous Arabic country is situated not only at the border of Israel but also strategically at the heart of what is referred to as the Arab world; changes in Egyptian policy will therefore affect the regional as well as the international level.

Elisabetta Recher: Italy and France: The effects of competition between allies on the regional stability in Northern Africa and on the European Union (an Italian perspective), AIES Fokus 8/2019

Peaceful protest in Egypt under Mubarak

Stefanie Felsberger: The emergence of peaceful protest in Egypt under Mubarak, Observer: A Journal on threatened Human Rights Defenders in the Philippines, Volume 4, Number 1, 2012