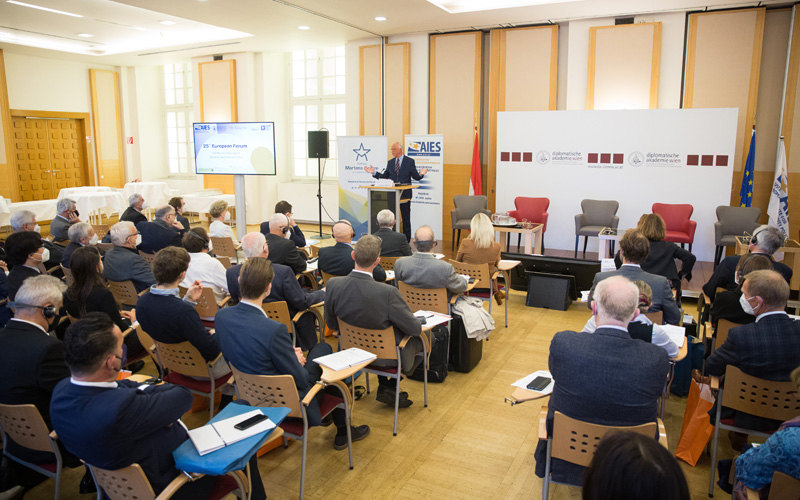 At the beginning of the event, AIES President Werner Fasslabend and the Deputy Director of the Vienna School of International Studies Susanne Keppler-Schlesinger delivered celebratory speeches regarding the 25th anniversary and set the scene for the debates that followed at the European Forum. Elisabeth Mayerhofer spoke on behalf of the Political Academy, highlighting the fruitful cooperation with institutions like the AIES and the Diplomatic Academy. 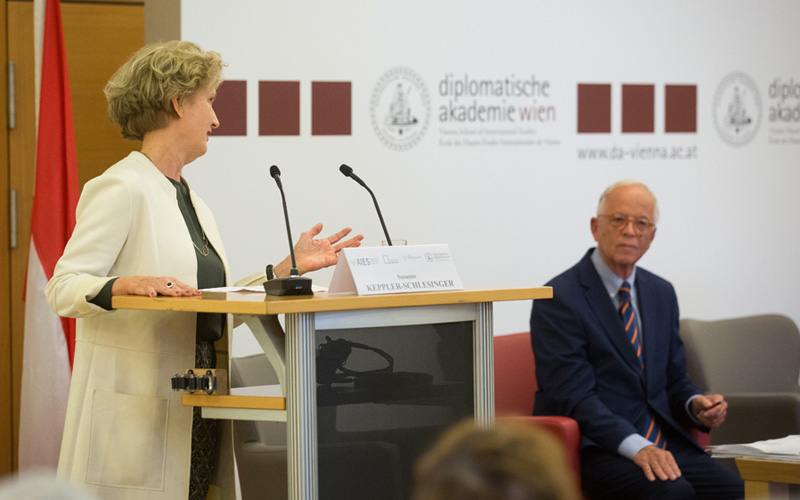 During the opening speeches, the Federal Minister for the EU and the Constitution, Karoline Edtstadler, provided an overview of the most pressing challenges faced by the European Union and reaffirmed Austria's commitment and contribution to the EU's security. 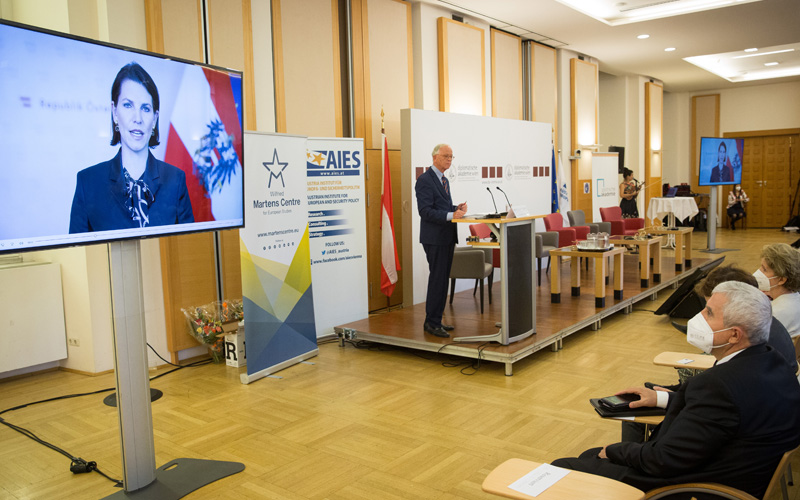 The Austrian Minister of Defence, Klaudia Tanner, argued in her address that a strong and secure Europe is a shared goal among the EU member states and elaborated on the various security risks identified by the Ministry of Defence, such as terrorism, cyber-attacks, natural disasters, blackouts, and pandemics. Tanner also reasserted Austria's support for the Strategic Compass not only as a tool, but also as a binding document. 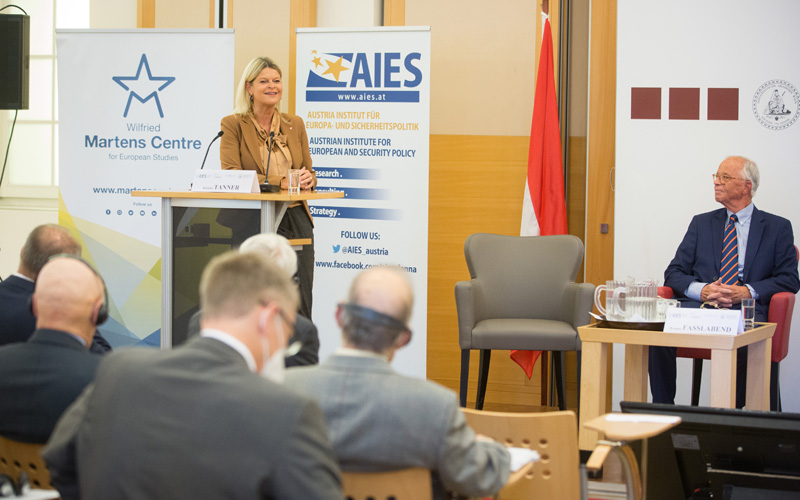 During the Keynote Speeches, the Vice-President of the European Parliament, Othmar Karas, gave prominence to the interlinkage between foreign and security policy by stressing that none of the novel threats can be dealt with by traditional tools or national means solely. Hence, a radical structural change is of utmost importance and he urged the EU to focus on better coordination and cooperation.

Thomas Greminger, Director of the Geneva Centre for Security Policy and former OSCE General Secretary, also emphasised the importance of cooperative security in times of crises.

Former Prime Minister of Slovakia and President of the Wilfried Martens Centre for European Studies, Mikulaš Dzurinda, argued that the EU needs to move towards vertical integration, particularly from a security standpoint in light of the growing aggressiveness from both China and Russia. 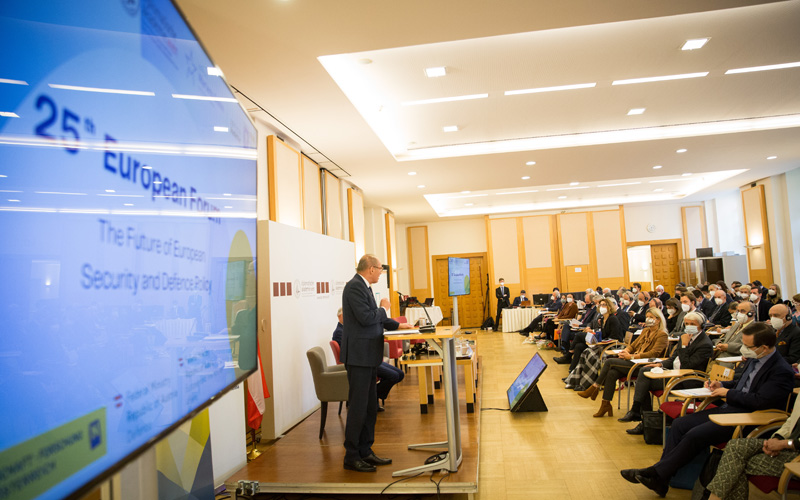 During the subsequent panel on the "Challenges for European Security and Defence Policy", the Chief of Defence Staff of the Austrian Armed Forces, General Robert Brieger, offered an overview of how the Common Security and Defence Policy (CSDP) has evolved and argued that it must become more coherent and comprehensive. French Senator and former Minister of Defence, Alain Richard, claimed that to achieve a more effective CSDP, a common definition of threats, a shared vision on the use of force, and the quality of the first mandate are needed. Geoffrey Hoon, former Defence Secretary for the United Kingdom, explored the prospects of a future EU-UK cooperation in the European security architecture. Following that, Member of the Polish Senate and former Polish Minister of Defence, Bogdan Klich, pointed out that in order to increase the EU's credibility, the reinforcement of the CSDP and the CFSP is necessary, as is the creation of a Defence Union. Lastly, the President of the Foreign Policy Institute in Turkey, Hüseyin Bagci, closed the panel discussion with an insightful analysis on Turkey's role in the context of European security. 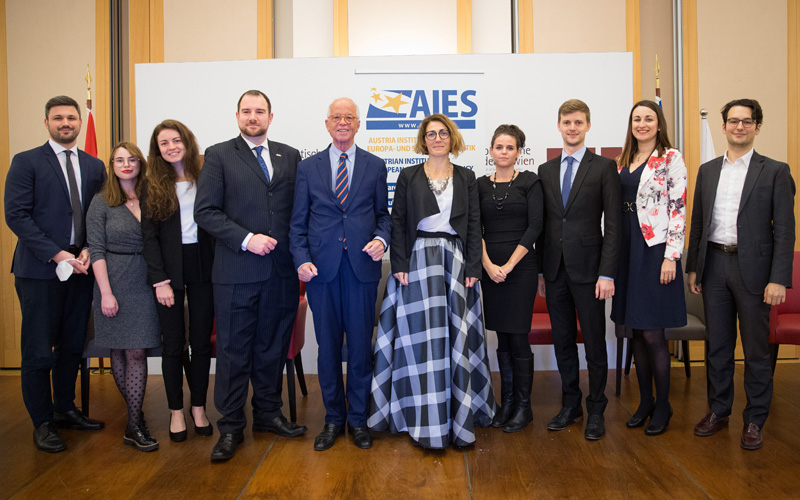