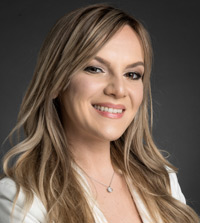 Apolonija Rihtarić, M.A. holds a Bachelor's degree in Political Science and Master's degree in International Relations from the Faculty of Political Science of Zagreb University. She also spent a semester abroad studying European and international law in Reims, France at the Faculty of Law and Political Science of the University of Reims-Champagne-Ardenne. During her academic career, she took part in the educational programme "United Nations Academy" of the Ministry of Foreign and European Affairs of the Republic of Croatia. Afterwards, she pursued an interdisciplinary postgraduate degree, the Diploma Programme, at the Diplomatic Academy of Vienna.

Additionally, she interned for GONG, a Croatian non-governmental organization as well as for the European Parliament, thereby acquiring significant practical work experience. Currently, she is working at KAICIID Dialogue Centre where she backs a programme dealing with conflict situations in the African, Asian and Arab regions.

Over the course of her education, Ms. Rihtarić had several papers published for different scientific journals on foreign and security matters. These articles, available in Croatian, English, and French, are issued in the "Croatian International Relations Review", "Croatian Political Science Review", "Contemporary Issues", and "Polemics: Magazine of the Diplomatic Academy of Vienna".

Ms. Rihtarić first joined the Austrian Institute for European and Security Policy (AIES) in 2015 as an Erasmus+ trainee. As of October 2017, she supports the Institute as an AIES Associate Fellow. Her research focus is on the Western Balkan countries, EU-Western Balkans relations, regional security cooperation and European foreign, security and defence policy.