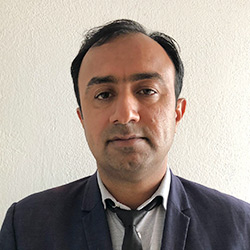 Dr. Yasir Khan has been with the Austrian Institute for European and Security Policy since September 2022, focusing his research on topics of South Asia in the field of economic, security, and political dimension amidst the rising Chinese role, particularly in countries such as Pakistan, India, Bangladesh, and Afghanistan. He is also deeply intrigue in the phenomenon of peacekeeping, peacebuilding, Migration, Counter-Terrorism and the greater role of the United Nations in the region. He is also interested to research on the role of European Security Policy in South Asia. Dr. Yasir Khan has completed his Master's degree in International Relations from the National University of Modern Languages Islamabad. He also achieved a Master's Degree in Peace and Conflict Studies from European Peace University (EPU) Stadtschlaining Burgenland Austria.

Dr. Yasir Khan completed his Ph.D. degree in "Political Science" with a focus on "UN Peacekeeping and the Role of Pakistan in DRC, Somalia, and Liberia". He served as a consultant with the United Nations Office on Drugs and Crime in Vienna with the section of Health and Counter-Terrorism. He served as a Director of International Relations with Sigmund Freud University. In addition, he served as Project Coordinator with Academic Council on the United Nations System (ACUNS) Vienna.