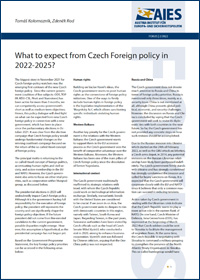 The biggest story in November 2021 for Czech foreign-policy watchers was the emerging first contours of the new Czech foreign policy. Since the current government (coalition of five subjects: ODS, TOP 09, KDU-CSL, Pirati and Starostove) has been active for more than 3 months, we can competently access government's short as well as medium term objectives. Hence, this policy dialogue will shed light on what can be expected from new Czech foreign policy in connection with a new government, which has been in place since the parliamentary elections in October 2021. It was clear from the election campaign that Czech foreign policy would undergo fundamental changes as the winning coalition's campaign focused on the return of the so-called Havel concept of foreign policy.

The principal motto is returning to the so-called Havel concept of foreign politics, accentuating human rights and civil so­ciety, and active membership in the EU and NATO. However, the Czech government also aims to focus on other vital priorities, such as cooperation within Visegrad group, as discussed below.

The presidential elections in 2023 will undoubtedly impact Czech foreign policy. Although it is the government having full responsibility for the execution of foreign policy, the president still represents the country and can significantly shape the foreign policy objectives. If the future president did not come from like-minded candidates to the current government, possible disparities might emerge. How­ever, this assumption is hypothetical, as the presidential campaign has not begun yet.

The key foreign policy priorities are analyzed in this AIES Fokus.