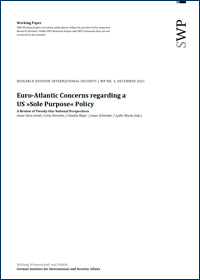 Austria wants to ensure that Europe never becomes embroiled in a renewed nuclear arms race. It is its official position that the catastrophic effects of the use of nuclear weapons and their inherent risks underline the precariousness of the security architecture based on nuclear deterrence. The Austrian Federal Government is committed to nuclear dis-armament and played a key role in the negotiations of the Treaty on the Prohibition of Nu-clear Weapons (TPNW) in 2017. The ban under international law is perceived as the pre-requisite for a world free of nuclear weapons. Generally, Austria is worried about the growing nuclear risks and welcomes every step towards reducing these, including a US "no first use" or "sole purpose" declaration.