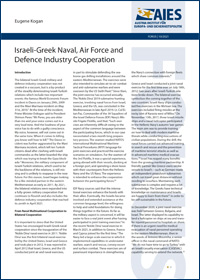 The bilateral Israeli-Greek military and defence industry cooperation was not created in a vacuum, but is a by-product of the steadily deteriorating Israeli-Turkish relations which include two important events: the famous World Economic Forum incident in Davos on January 29th, 2009 and the Mavi Marmara incident on May 31st, 2010. At the time of the incident, Prime Minister Erdogan said to President Shimon Peres: "Mr Peres, you are older than me and your voice comes out in a very loud tone. And the loudness of your voice has to do with a guilty conscience. My voice, however, will not come out in the same tone. When it comes to killing, you know well how to kill." The Davos incident was further aggravated by the Mavi Marmara incident, which left ten Turkish citizens dead after clashing with Israeli commandos as the latter boarded the ship which was trying to break the Gaza blockade. Moreover, the military component of Israeli-Turkish relations, which used to be the backbone of the relations, is still missing and is unlikely to reappear in the near future. For this reason, Israel began looking for a like-minded partner in the eastern Mediterranean as early as 2011. By 2021, the bilateral relations were expanded into a fully-grown military cooperation that continues to flourish and also includes the defence industry cooperation that reached its zenith in April 2021.