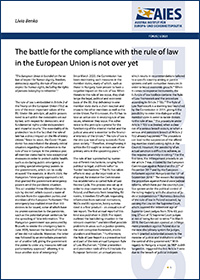 The rule of law is embedded in Article 2 of the Treaty on the European Union (TEU) as one of the most important values of the EU. Under this principle, all public powers need to act within the constraints set out by law, with respect for democratic and fundamental rights under independent and impartial courts. The essentiality of its protection lies in the fact that the rule of law has a direct impact on the life of every citizen. Since its onset, the Covid-19 pan- demic has exacerbated the already critical situation regarding the adherence to the rule of law in Europe. In the previous year, all member states had to take exceptional measures in order to protect public health, such as declaring public emergency, or granting special emergency powers to the governments, which can be easily misused.