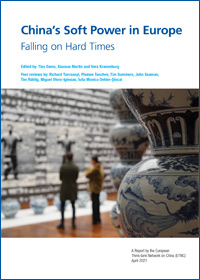 Based on separate analyses of 17 countries and EU institutions, this report concludes that Chinese soft power in Europe – defined as the ability to influence preferences through attraction or persuasion – has fallen on hard times. Different patterns of Chinese soft power projections can be seen across four groups of countries analysed in this report: In the first group (Austria, Hungary, Poland, Portugal and Slovakia), China does not appear compelled to actively project its soft power, mostly because of the lack of public interest in these countries. In Italy and Greece, China's soft power approach aims to arrest the trend of a deteriorating image and is geared towards damage containment. In Germany, Latvia, the Netherlands, Romania, Spain and the UK, perceptions of China are clearly becoming less favourable, and Beijing is struggling with growing vigilance. Finally, in Czechia, Denmark, France, and Sweden, China's soft power is clearly in a state of free fall.

China's soft power effort appears to be reaching only a small segment of the Austrian public, as both its media presence and exchanges in education and culture remain of limited scale. By contrast, Chinese diplomats maintain extensive connections to Austrian economic and political elites through a multitude of bilateral associations. Hence, Chinese soft-power efforts seem to be directly reaching decision-makers, rather than indirectly by creating an enabling environment. Moreover, China's soft power in Austria appears to stem from its economic weight. The PRC's messaging tends to revolve accordingly around economic themes. Crucially, Austria's nonchalance towards China, manifested through its lack of public debate and strategy, might be enhancing China's soft power in the Alpine republic.

About the European Think-tank Network on China (ETNC)

The European Think-tank Network on China (ETNC) is a gathering of China experts from various European research institutes. It is devoted to the policy-oriented study of Chinese foreign policy and relations between China and European countries, as well as China and the EU. The ETNC facilitates regular exchanges among participating researchers with a view to deepening understanding within the European policy and research community and the broader public about how Europe, as a complex set of actors, relates with China and how China's development and evolving global role are likely to impact the future of Europe. The network's discussions and analyses take a decidedly 'bottom–up' approach, accounting for the various aspects of bilateral relations between European countries and China, and the points of convergence and divergence among EU member states, in order to examine EU–China relations in a realistic and comprehensive way.

The network was first launched on the initiative of the Elcano Royal Institute and the French Institute of International Relations (Ifri) in Brussels on 6 November 2014. This meeting brought together experts from eleven EU member states, as well as observers from EU institutions. The ETNC members decided to meet in a different European capital every six months and the Mercator Institute for China Studies (MERICS) joined Elcano and Ifri in their efforts to move the project forward. The network now includes members from 21 research institutes in as many countries, and each participates on the basis of equality.

The ETNC strives for independent policy research and analysis and, since its inception, is entirely funded by its participating members. The topics considered in ETNC reports are debated and decided upon collectively by its members. The views and analysis provided in each chapter of this report are thus the sole responsibility of the signed author or authors and do not in any way represent the views of all ETNC members, participating institutes, or the institutes with which the authors themselves are affiliated.

Velina Tchakarova, Enter the 'DragonBear': The Russia-China Partnership and What it Means for Geopolitics, ORF Issue Brief No. 538, April 2022, Observer Research Foundation.