The coup d‘état in Mali 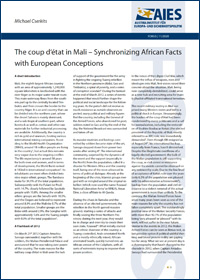 The recent military mutiny in Mali surprised many Western states and led to a political shock in Europe. Unsurprisingly, the leaders of the coup d'état had been condemned by many politicians and a call for normalization, including the restoration of Ibrahim Boubacar Keita's (the elected president of the Republic of Mali, mostly referred to as IBK) rule, was immediately demanded. Even though IBK resigned as of August24th, his international backup, especially from France, hasn't diminished. Despite the illegitimate overthrow of a legally elected government, the bulk of the Malian population is still supporting the coup, as civil unrest or resistance against the events cannot be observed on any noteworthy scale. Due to the low level of acceptance of Keita's rule over the years, backup from the population and civil resistance to a violent removal of the actual government is more than unlikely.

Violent extremism in the Sahel