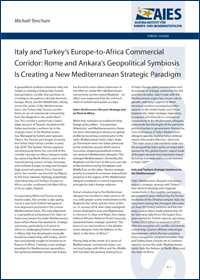 A geopolitical symbiosis between Italy and Turkey is creating a Turkey-Italy-Tunisia transportation corridor that promises to reconfigure the patterns of trade between Europe, Africa, and the Middle East. Slicing across the center of the Mediterranean basin, the Turkey-Italy-Tunisia corridor forms an arc of commercial connectivity from the Maghreb to the wider Black Sea. The corridor's central hub is Italy's deep-sea port of Taranto, located on the Italian peninsula's southern tip in the strategic heart of the Mediterranean Sea. Managed by Turkish port operator Yilport, the Taranto port began servicing the Turkey-Italy-Tunisia corridor in early July 2020. The Taranto-Tunisia segment simultaneously forms the core link of the corridor's Europe-to-Africa transport route, by connecting North Africa's coast to the manufacturing centers of Italy, Germany, and northern Europe via Italy and Europe's high-speed rail systems. From Tunisia's ports, the corridor can also link via Algeria to the Trans-Saharan Highway, potentially extending Italy and Turkey's Europe-to-Africa corridor southward into West Africa as far as Lagos, Nigeria.