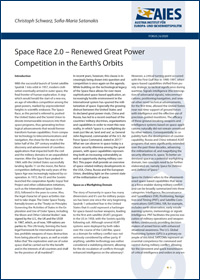 With the successful launch of Soviet satellite Sputnik 1 into orbit in 1957, modern civilization eventually arrived in outer space, the final frontier of human exploration. A step which would herald the start of a new era, an age of relentless competition among the great powers, marked by unprecedented heights in scientific endeavor. The Space Race, as this period is referred to, pushed the United States and the Soviet Union to devote immensurable resources into their space programs, thus generating technological advancements that would forever transform human capabilities. From computer technology to telecommunications and navigation, the chase for the stars in the latter half of the 20th century enabled the discovery and advancement of countless applications that impacted both the civil and the military domains in an unparalleled manner. After the Space Race peaked in 1969, with the United States successfully landing Apollo 11 on the moon, the fierce competition defining the early years of the Space Age was increasingly replaced by cooperation. In 1972, the US and the Soviets launched the cooperative Apollo-Soyuz Test Project and other collaborative initiatives, such as the International Space Station (ISS), followed in the years to come. Also, the legal character of space activities started to take shape. The Outer Space Treaty, formally known as the "Treaty on Principles Governing the Activities of States in the Exploration and Use of Outer Space, including the Moon and Other Celestial Bodies", was signed by the U.S., the UK and the USSR in 1967, which, as of now, 109 nations are parties to. This UN treaty, forming the basic legal framework for international space law, prohibits weapons of mass destruction from being placed in space, as well as establishes that "the exploration and use of outer space shall be carried out for the benefit and in the interests of all countries and shall be the province of all mankind".

In recent years, however, this clause is increasingly being drawn into question and competition is once again on the agenda. While building on the technological legacy of the Space Race allows for ever more sophisticated space-based application, an increasingly hostile environment in the international system has spurred the militarization of space. Especially the growing distrust between the United States and its declared great power rivals, China and Russia, has led to a recent overhaul of the countries' military doctrines, organizations and capabilities in order to meet this new reality, in which "space is a warfighting domain just like air, land and sea", as General John Raymond, commander of the U.S. Air Force Space Command, stated in 2017. What we can observe in space today is a classic security dilemma among the great powers, with space capabilities representing both an increasing vulnerability as well as opportunity during military conflict. This paper shall provide an overview of space-related military developments in the USA, China, Russia and the European Union, shedding light on the current state of the militarization of space.