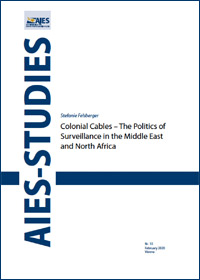 Neither security studies as a discipline, nor general analyses of geopolitics have placed great emphasis on questions of data, technology, or internet infrastructure. Focus has been put on studying arms development, energy dependency, access to natural resources or strategic geographic points, or infrastructure more broadly. The question of information, communication, and technology (ICT) has only recently come into clearer focus. Under the rubric cybersecurity, the question was debated how countries could protect their ICT infrastructure and other increasingly digitised infrastructure from malicious attacks by other states or non-state actors as war moved to the so-called 'cyberspace.' In line with a shift in critical security studies where the referent object of security studies are not states but individuals, the question of surveillance needs to be added to this agenda.

Surveillance as a threat for states but also people has been thrust on the public agenda by the whistle-blower Edward Snowden who worked as data analyst for a private company subcontracted by the United States Central Intelligence Agency (CIA). He revealed extensive, illegal mass surveillance programmes by the US government, and other states, to spy on people and state leaders all over the world. The role of private companies was and is pivotal to his revelations: Snowden himself worked as data analyst for an external company and not within the CIA itself. Private companies also played a large role in the mass surveillance programmes he revealed.

Today, digital technologies play a role in almost every aspect of social, political, and economic life—albeit to different degrees in different places and income groups. Similar to private military contractors, core aspects of communications and intelligence infrastructure have been outsourced to or rely on technology companies. Thereby elements that used to be considered central to state sovereignty have become privatised. Just like the implementation of the Iraq War heavily relied on private military contractors, such as Blackwater, surveillance depends on private companies. This is true for mass as well as targeted surveillance. While we have some limited knowledge about mass surveillance, companies who sell surveillance technology operate in secrecy. We neither know much about their activities, nor how they tie in with geopolitical dynamics in the Middle East and North Africa (MENA). This is what I focus on in this study: the activities of the three best documented companies selling surveillance services in the context of the evolving geopolitics in the MENA region. What insights can be gained from studying the activities of companies that are crucial to surveillance operations in MENA? What do these companies mean for the different emancipatory uprisings in the region? What role does Europe play in this surveillance game? And what role does surveillance play in the European Union's (EU) policies towards the MENA region? What lessons can the EU learn for their future policies towards surveillance technology?

In the first chapter, I present the framing of this study. I show that the existing colonial roots of global power imbalances have influenced current technology development, infrastructure, and surveillance practices. I argue that these colonial roots influence how technology and surveillance work, and how we think about both issues. This knowledge helps to better understand today's regional politics of surveillance (both in the MENA region but also in Europe). To trace these, the second chapter looks at the three big and well-known companies selling surveillance software to MENA countries: NSO, Gamma Group, and Hacking Team, two of which are European companies and one is Israeli. I illustrate what type of surveillance technology is sold, how it is used, and contextualise these insights. In the final chapter, I point to two consequences of the unbridled sale of surveillance software for the European Union and democracy at large. I address what this means for dealing with authoritarian governments in MENA and argue that the unchecked use of targeted surveillance software will eventually harm Europe. In my conclusion, I recommend steps for the future.