The Fight against Terrorism

Reinhold Lopatka: The Fight against Terrorism and the Focus of Inter-Parliamentary Cooperation and the United Nations, AIES Studien 9 EN/2019 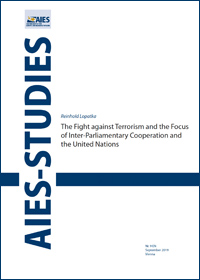 The Inter-Parliamentary Union (IPU) was created in 1889; more than 50 years later, in 1945, the United Nations officially came into existence. It then took another 75 years before these important organizations signed their first memorandum of understanding, which provides for a comprehensive programme for the fight against terrorism.

In the trilateral memorandum, the United Nations recognized the important role of parliamentarians and national parliaments in ensuring the success of the fight against terrorism; for the first time, a concrete framework for cooperation between the IPU and the United Nations on a specific topic is being outlined.
In this context, an important role is played by the "High-Level Advisory Group on Countering Terrorism and Violent Extremism" (HLAG), which has been fully operational since May 2019.

This paper deals with the programme of activities and the measures recently taken by the European Parliament, the 57 participating states of the OSCE, the NATO countries, and the Parliamentary Assembly of the Council of Europe, the latter representing 47 states with a total of 820 million inhabitants. The lead in the fight against terrorism is taken by the United Nations, a fact which is fully recognized by all other actors involved.