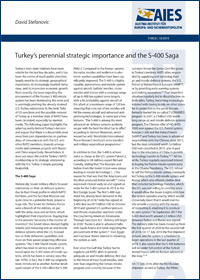 Turkey's inter-state relations have been volatile for the last few decades, and it has been the centre of much public attention, largely owed to its strategic geographical importance, its increasingly hawkish behaviour, and its impressive economic growth. Most recently, the issue regarding the procurement of the Russian S-400 missile system has been dominating the news and is seemingly pushing the already strained U.S.-Turkey relationship to the limit. Talks of US-sanctions and the possible removal of Turkey as a member state of NATO have been circulated, especially by alarmist media. The following paper highlights the sobering reality behind Turkey's decision and argues that there is a discernible pivot away from past dependencies on partnerships of conveniences with the U.S. and other NATO members, towards arrangements and common projects with Russia and China respectively. Nevertheless, it does not mean the end for Turkey's NATO membership or its strategic relationship with the U.S. Turkey is simply pursuing Realpolitik.