Matteo Ilardo: Conflict Analysis: The Second Libyan Civil war – and how to avoid a third one, AIES Fokus 9/2019 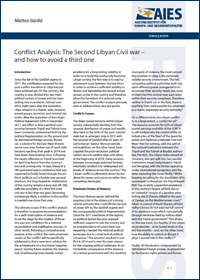 Since the fall of the Qaddafi regime in 2011, the stabilization expected for the post-conflict transition in Libya has not been achieved yet. On the contrary, the country is now divided into two main political centers of power and has been sinking into an endemic civil war ever since. Eight years after the revolution, Libya remains in a chaotic state, home to armed groups, terrorists, and criminal networks. After the expiration of the Libyan Political Agreement (LPA) in December 2017, any effort to find a political compromise between Tripoli and Tobruk have been constantly undermined both by the political fragmentation on the ground and by detrimental foreign proxies. Moreover, a solution for the East-West division seems now even further out of reach with tensions reaching their peak in 2014 and have been deteriorating since. Following the recent offensive on Tripoli launched on April 4 by forces from the country's East and coming only 10 days ahead of a UN-sponsored peace conference that was supposed to finally break through the political gridlock and schedule new general elections, the long-hoped-for stabilization of the country remains a long way off. Still, with the possibility of a third full-scale civil war in less than ten years becoming increasingly likely, a solution to the conflict is needed now more than ever.

The ultimate scope of this conflict analysis is therefore to propose recommendations for a swift interruption of violence and to set the stage for the creation of those sine qua non conditions for a national reconciliation and stabilization process. In other words, following a comprehensive analysis of the conflict, the most proximate causes of the conflict will be specifically addressed to find a near-term solution for the achievement of a functional "negative peace", leaving future analyses the onerous task of addressing more deeply rooted problems for a long-lasting stability. In order to re-build the profoundly fractured Libyan society, the first step is to reach a permanent truce between the two blocs in order to achieve a sufficient stability to disarm and demobilize the several armed groups active in the country and therefore allow the formation of a national unity government. This conflict analysis precisely aims to address these very last points.