Elisabetta Recher: Italy and France: The effects of competition between allies on the regional stability in Northern Africa and on the European Union (an Italian perspective), AIES Fokus 8/2019 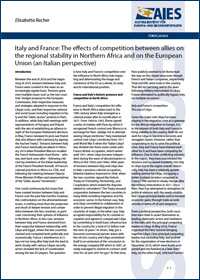 Between the end of 2018 and the beginning of 2019, tensions between Italy and France were covered in the news on an increasingly regular basis. Tensions grew over multiple issues such as the two countries' budget proposal to the European Commission, their respective measures and strategies adopted in response to the Libyan crisis, and their respective national and social issues including migration in Italy and the "Gilets Jaunes" protests in Paris. In addition, while Italy held meetings with representatives of Hungary and Poland with the aim of establishing an alliance in sight of the European Parliament elections in May, France renewed its post-war friendship and alliance with Germany by signing the Aachen Treaty. Tensions between Italy and France eventually escalated in February 2019 when President Macron recalled the French Ambassador from Rome - who was sent back soon after - following criticism by members of the Italian leadership of the French President himself, of France´s colonial practices in Africa (i.e. CFA), and following the meeting between Deputy Prime Minister Di Maio and representatives of the "Gilets Jaunes" movement.

One could continuously list issues that have created tension between Italy and France over the past few months; however, this confrontation on the aforementioned issues, is nothing more than the projection and result of deeper tension and competition between the two countries, in particular concerning their spheres of influence in Northern Africa. In this case, tensions between Italy and France stemmed from their respective bilateral relationship with Libya and Egypt, where the two countries clashed and competed both politically and economically. France´s interference in Libya not too long after Italy took the lead to work closely with various Libyan security actors revealed the lack of coordination among the two EU players. The question is how Italy and France´s competition over the influence in North Africa risks impacting and deteriorating the image and coherence of the EU as a whole, its unity and its international position.

Matteo Ilardo: Conflict Analysis: The Second Libyan Civil war – and how to avoid a third one, AIES Fokus 9/2019

The Rivalry between France and Italy over Libya

Matteo Ilardo: The Rivalry between France and Italy over Libya and its Southwest Theatre, AIES Fokus 5/2018