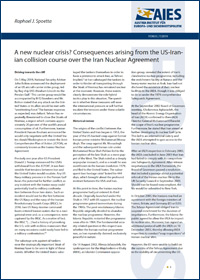 On 5 May 2019, National Security Adviser John Bolton announced the deployment of an US aircraft-carrier strike group, led by flag ship USS Abraham Lincoln to the Persian Gulf. This carrier group would be accompanied by B-52 bombers and Mr. Bolton stated that any attack on the United States or its allies would be met with "unrelenting force." The Iranian response, as expected, was defiant. Tehran has repeatedly threatened to close the Straits of Hormuz, a region which contains approximately 20 percent of the world’s annual consumption of oil. Furthermore, Iranian President Hassan Rouhani announced he would only negotiate with the United States should Washington re-instate the Joint Comprehensive Plan of Action (JCPOA), or commonly known as the Iranian Nuclear Agreement.

Precisely one year after US President Donald J. Trump announced the USA's withdrawal from the JCPOA, it was foreseeable that tensions between Iran and the United States would escalate.