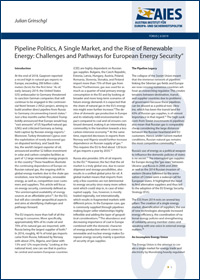 At the end of 2018, Gazprom reported a record high in natural gas exports to Europe, exceeding 200 billion cubic meters (bcm) for the first time. As of, early January 2019, the United States (US) ambassador to Germany threatened to sanction German companies that will continue to be engaged in the controversial Nord Stream 2 (NS2) project, aiming to build another direct pipeline from Russia to Germany circumventing transit states. Just a few months earlier President Trump boldly announced that Europe would buy "vast amounts" of US liquefied natural gas (LNG) and criticized Germany as being held captive by Russian energy exports. Moreover, Turkey threatened Cyprus over the exploitation of newly discovered gas on disputed territory, and Saudi Arabia, the world's largest exporter of oil, announced another $2 billion investment in solar and carbon complex facilities as part of 12 large renewable energy projects in the country. These headlines illustrate the continuing dependence of Europe on Russian natural gas, the ongoing shift in global energy markets due to the shale gas revolution, new technologies, renewable energy, as well as, competition over customers and suppliers. This article will focus on energy security, commonly defined as "the uninterrupted availability of energy sources at an affordable price", for the EU, but will also consider geopolitical aspects and aims at identifying challenges and pathways forward.