Shaun Riordan: Post-Brexit Relations between the EU and the UK in the Field of Security and Defence Policy, AIES Fokus 1/2019 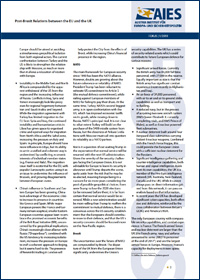 The Austrian Government included security as one of the three priorities for its EU Presidency. Although it framed security primarily in terms of border protection and the control of immigration, it also committed itself to strengthening the Common Security and Defence Policy (CSDP) and promoting the development of the Perma­nent Structured Cooperation (PESCO). Progress on both was, in the end, limited, overtaken in part by the focus on the need to secure a Brexit withdrawal agreement with the UK. Brexit itself has significant implications for European defence and security, given Britain's military and intelligence assets. While various pronouncements have been made during the Austrian Presidency about the need to strengthen European security, and even move towards a European army, these have mainly been in response to the perceived shifting relation between Europe and the United States due to the unreliability of the Trump administration. Most recently President Macron has argued in favour of enhanced European military cooperation to im­prove European defence against Russia and China given that Europe can no longer rely on the US. However, less attention has been paid to how to retain UK collaboration in EU security post-Brexit. Partly this is because such discussions have largely been limited to the framework of the UK's negotiations with the European Commission on the Withdrawal Agreement. There is some evidence that in these discussions the Commission has allowed ideology to trump Europe's security needs.

Shaun Riordan is Director of the Department of Diplomacy and Cyberspace at the European Institute for International Relations. A former British diplomat, he is the author of „The New Diplomacy" (2003) and „Cyberdiplomacy: Managing Security and Governance in Cyberspace" (2019).