Sofia Maria Satanakis: Greece and the Former Yugoslav Republic of Macedonia: The Prespa Agreement. What comes next?, AIES Fokus 6/2018 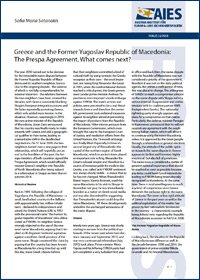 The year 2018 turned out to be decisive for the intractable name dispute between the Former Yugoslav Republic of Macedonia and its southern neighbor, Greece. Due to this ongoing dispute - the salience of which is not fully comprehensible for external observers - the relations between the two neighbors have been strained for decades, with Greece constantly blocking Skopje's European integration process and the latter repeatedly provoking Greece, which only added more tension to the situation. However, surprisingly in 2018, the new prime minister of the Republic of Macedonia, Zoran Zaev announced that his country was finally ready to make amends with Greece and add a geographical qualifier to their name, leading to a remarkable shift in the deadlocked negotiations. On 17 June 2018, the two neighbors turned over a new page in their relationship, which will hopefully put an end to the hostilities of the past: the foreign ministers of both countries signed the Prespa Agreement, which would officially rename Greece's neighbor into Republic of North Macedonia after being subject to a referendum in Skopje no later than in autumn 2018.

The CFSP of the EU – The View from Austria