The Rivalry between France and Italy over Libya

Matteo Ilardo: The Rivalry between France and Italy over Libya and its Southwest Theatre, AIES Fokus 5/2018 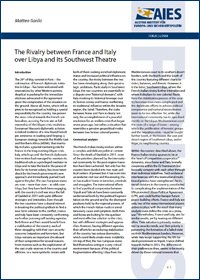 The 29th of May summit in Paris – the culmination of France's diplomatic initiative in Libya – has been welcomed with reservations by other Western powers, skeptical in pushing for the immediate elections advocated in the agreement given the complexities of the situation on the ground. Above all, Rome, which still aspires to be recognized as holding a special responsibility for the country, has proven the most critical towards the French unilateralism, accusing Paris to aim at full ownership of the Libyan crisis resolution. Emmanuel Macron's diplomatic activism is indeed evidence of a new-found French pre-eminence in leading (and forging) a European strategy towards the Middle East and Northern Africa (MENA), that inevitably includes a pivotal mediating role for France in the long-running Libyan crisis. Italy, which up until the French diplomatic intervention had managed to maintain its traditional role as a privileged mediator in Libya and to take the lead in the peace efforts for its former colony, has been taken aback by the French government's new approach and immediately pushed back against the plan. The two European states are now – more than ever – at odds over Libya, but they have both been engaging with the country's civil war since the fall of Qaddafi in 2011 with quite different strategies and intensities. Even though the two countries have a shared interest in breaking the political gridlock to find a near-term solution to the conflict, France and Italy have been constantly confronting each other pursuing self-serving agendas. Both Rome and Paris would benefit from a stabilization of the country, each of them struggling with their own security concerns (migration and terrorism), but Libya remains an important chessboard of their competition for several reasons. From motives such as the exploitation of the vast crude reserves in the country and offshore, to a more symbolic terrain with both of them seeking enriched diplomatic status and increased political influence on the country, the rivalry between the two has been developing along their geostrategic ambitions. Particularly in Southwest Libya, the two countries are essentially in a dispute over "historical domains", with Italy invoking its historical leverage over its former colony and France reaffirming its traditional influence within the broader region, the Sahel. Therefore, the stake between Rome and Paris is clearly not only the accomplishment of a peaceful resolution for an endless crisis that began seven years ago, but rather a situation that resembles a genuine geopolitical rivalry between two former colonial powers.