The Rise of Russian Disinformation in Europe 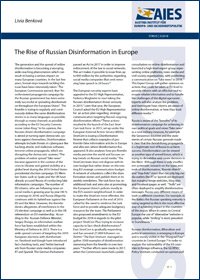 The generation and the spread of online disinformation is becoming a worrying, wide-reaching phenomenon which can result in having a serious impact on many European countries. In the last few years, formal steps towards tackling this issue have been intensively taken. The European Commission warned, that “An orchestrated propaganda campaign by the Russian government has been extremely successful at spreading disinformation throughout the European Union”. The Kremlin is trying to regularly and continuously deliver the same disinformation stories in as many languages as possible, through as many channels as possible according to the EU Security Commissioner Julian King. In his opinion, the Russian-driven disinformation campaign is aimed at turning open democratic systems against themselves. Disinformation attempts include threats in cyberspace like hacking attacks and malicious software, terrorist online propaganda, which are disrupting the democratic systems. The problem of online spread “fake news” became apparent in the context of the crisis in Ukraine and gained visibility at a global level during the 2016 United States presidential election campaign. EU Member States such as Spain and the UK have already accused Russia of conducting fake information campaigns. The number of EU citizens, who are following news on social media is growing year by year (46 % on average in 2016) and Russia diligently continues with its hybrid war against the EU and the West.