How to Strengthen Resilience in Fragile States: Taking Stock 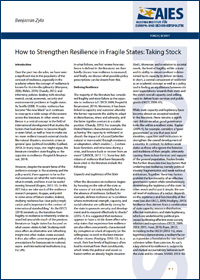 Over the past two decades, we have seen a significant rise in the popularity of the concept of resilience, especially in the academy where the concept of resilience is known for its interdisciplinarity and informing policies dealing with developmental, social, economic, security and environmental problems in fragile states. As Seville notes, resilience has become "the new black" as it continues to crop up in a wide-range of discussions ­across the literature. In other words resilience is a central concept in the field of international development that studies the factors that lead states to become fragile or even failed, as well as how to make states more resilient towards external shocks like natural disasters, economic crises or general (geo-)political instability. In many ways, one might argue, the literature considers state fragility as the opposite to resilience.

However, despite the recent fame of the resilience concept in the academy and the policy world, there appears to be no formal consensus on what the term means, what it entails, and how it can be useful moving forward. In this AIES Fokus we take stock of the resilience research program, its gaps, and point to some areas of future studies. Indeed, studying resilience has clear policy implication and is important in the context of international statebuilding. As the OECD reminds us, the transition from fragility to resilience is inherently under-researched area while much of the previous literature on fragile states has focused on what causes states to fail. Studying resilience offers an alternative and refreshing insight into what makes states succeed. It thus also offers some important policy prescriptions for bureaucrats in national, supra- and international institutions (e.g. EU, UN).

The Covid-19 Situation in Syria

Christine Strassmaier: The next chapter of the Syria crises – (obstacles to) reconstruction under the perspective of the current and future trajectory of the conflict, AIES Fokus 5/2017