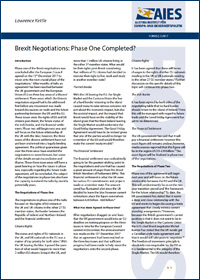 Phase one of the Brexit negotiations was concluded after the European Council agreed on the 15th December 2017 to move onto the next crucial phase of the negotiations.1 After months of talks an agreement has been reached between the UK government and the European Union (EU) on three key areas of a 'divorce' settlement: Three areas which the Union's negotiators argued had to be addressed first before any movement was made toward discussions on trade and the future partnership between the UK and the EU. These issues were the rights of EU and UK citizens post-Brexit, the future status of the Irish border, and the financial settlement. Phase two will begin next year and will focus on the future relationship of the UK with the bloc; however, the three issues of the divorce settlement have not yet been enshrined into a legally binding agreement. The political guarantees given over the three areas have enabled the negotiations to move forward, but some of the details remain inconclusive and illusive. These three issue areas will have a great bearing on how the issues in phase two, especially regarding the future trade agreement, will be concluded. The subject of the negotiations in phase two also have the capacity to extend the talks by months potentially years.