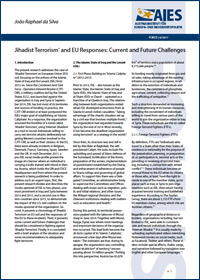 The present research addresses the case of 'Jihadist Terrorism' on European Union (EU) soil, focusing on the actions of the Islamic State of Iraq and the Levant (ISIL) from 2015 on. Since the Combined Joint Task Force - Operation Inherent Resolve (CJTF-OIR), a military coalition led by the United States (U.S.), was launched against the organization in Iraq and Syria in September 2014, ISIL has lost most of its territories and sources of funding. In practice, the CJTF-OIR ended or at least postponed the ISIL's major goal of establishing an 'Islamic Caliphate'. As a response, the organization assumed the frontline of a trend called 'Jihadist Terrorism', using 'Internet Jihadism' as a tool to recruit individuals willing to carry out terrorist attacks deliberately targeting Western countries involved in the CJTF-OIR, as well as their citizens. In the EU, there were already incidents in Belgium, Denmark, France, Germany, Spain, Sweden and the UK. In mid-December 2017, a pro-ISIL social media profile posted the image of a banner where an individual is carrying a knife stained with blood in Vienna, Austria, which holds the UN and OSCE Headquarters and from where the present research is being published. In order to address such an urgent topic, first, the present research divides and describes the modus operandi of ISIL in two phases, one most prominent in Iraq and Syria between 2013 and 2015, and a second one in Western countries since 2015, to demonstrate the impact of the U.S.-led coalition on the modus operandi of the organization. Second, it presents a chronology of 'Jihadist Terrorism' on EU soil and the responses of the EU to these incidents. Third, it presents some current and future challenges that should be considered in fighting against 'Jihadist Terrorism'. Finally, it is concluded with a brief analysis of the situation and some recommendations to adequately fight terrorism.

The Covid-19 Situation in Syria

How to Strengthen Resilience in Fragile States: Taking Stock

Christine Strassmaier: The next chapter of the Syria crises – (obstacles to) reconstruction under the perspective of the current and future trajectory of the conflict, AIES Fokus 5/2017