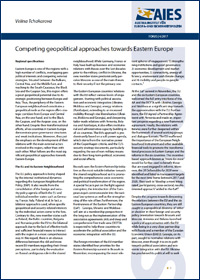 The Black Sea area and the shared neighborhood will remain a space of competitive agendas and a struggle for geopolitical influence, which creates a situation far from static. The trend is towards decreasing but more assertive Russia's and Turkey's influence and growing EU's and USA's participation in the region. This created a potential for complementary policy between Moscow and Ankara towards the shared neighbourhood. At the same time, the US and the EU approach began to differentiate from one another, as the USA put emphasis on the military buildup and exercises along the Eastern Flank of NATO members as well as defense cooperation with some countries in the region, while the EU focused more on the soft power agenda by promoting the political, economic and social transformation in the Eastern European countries, particularly in the three AA signatories. The biggest question mark for now is, how the Chinese participation in the region will evolve. It is to be assumed that China's interests in Eastern Europe are long-term and its actions will certainly reshuffle the regional dynamics. To summarize, the tendency is that the different approaches of the external actors will continue to compete with one another, making the geopolitical situation even more complex in the years to come.

The Strategic Role of External Actors in the Western Balkans

Johann Wolfschwenger: The EU's Eastern Partnership between a rock and a hard place, AIES Fokus 9/2020