Europe‘s Response to the Migration Crisis 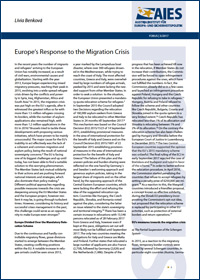 In the recent years the number of migrants and refugees arriving to the European Union has notably increased, as a result of civil wars, environmental causes and globalization. Starting with the year 2013, Europe began experiencing mixed migratory pressures, reaching their peak in 2015, evolving into a wide-spread refugee crisis driven by the conflicts and poverty in Syria, Iraq, Afghanistan, Africa and South Asia. In 2015, the migration crisis was put high on the EU´s agenda, after it witnessed the greatest influx so far with more than 1.5 million refugees crossing its borders, while the number of asylum applications also remained high, with more than 1.2 million applications in the EU in 2016. Brussels tried to tackle these developments with proposing various initiatives, which have proven to be mainly unsuccessful. The major cause for the EU's inability to act effectively was the lack of a coherent and common migration and asylum policy, being the result of national sovereignty concerns. The EU is facing one of its biggest challenges and up until today, has not been able to find a suitable solution to this worrying phenomenon. The Member States lack mutual solidarity in their actions and are pushing forward national interests and strategies, which also dominate their policy making. Different political approaches regarding possible measures towards the crisis are deepening among the EU Member States and the European project, however resi­lient it may be, is going through turbulent times. However, considering its history and successful crises management in the past, this challenge could serve as an opportunity to make Europe even stronger.