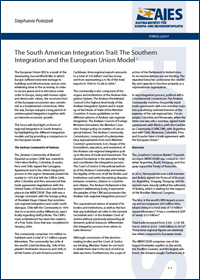 The European Union (EU) is a result of the devastating Second World War in which Europe suffered extensive damage to build­ings and infrastructure, and an overwhelming blow to the economy. In order to secure peace and re-introduce some order in Europe, along with human rights and democratic values, the reconstruction of the European economies was considered as a fundamental cornerstone. After the war, Europe enjoyed a long period of uninterrupted integration together with an intensive economic growth.

This focus will shed light on forms of regional integration in South America by highlighting the different integration models and by providing a comparison to the European model.