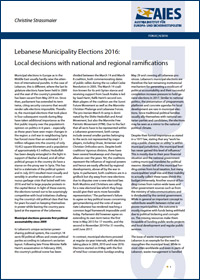 Municipal elections in Europe as in the Middle East usually hardly raise the attention of international pundits. In the case of Lebanon, this is different, where the last legislature elections have been held in 2009 and the seat of the country’s president has been vacant from May 2014 on. Since then, parliament has extended its term twice, citing security concerns that would render safe elections impossible. Therefore, the municipal elections that took place in four subsequent rounds during May have taken additional importance as the first public inquiry over the population’s opinion on politics in 6 years – especially as these years have seen major changes in the region: a civil war in neighboring Syria has forced more than an estimated 1.5 million refugees into the country of only 10,452 square kilometers and a population of approximately 4.5 million; Hezbollah has been deeply entangled in the fight in support of Bashar al-Assad, and all other political groups in the country do have a stance on the proxy war in Syria. This has led to a stalemate of the political system and in July 2015 resulted most visually and sensibly in another escalation of continuous garbage crisis that lasted well into 2016andled to large popular protests in the capital Beirut. In light of these events, the elections turned out to be surprisingly competitive with local initiatives challenging the country’s old political class that has for years focused on keeping themselves in power while leaving the country paralyzed at the expense of the Lebanese.